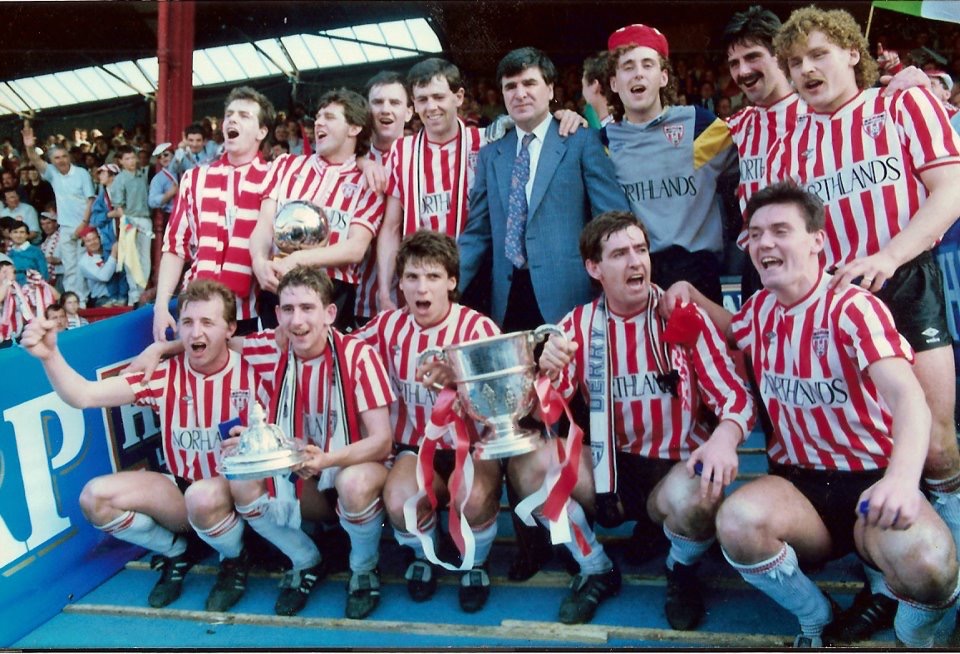 Ahead of Sundays FAI Cup Final I look back at Cork City FC’s first final in 1989.

Under the watchful eye of Alex Ferguson at a sunny Dalymount Park his Cork side met the Norths all conquering Derry City in the final.

The northerners in their famous red and white “candy stripes” were looking to complete a domestic treble having comfortably won the league and league cup.

The unique pairing in the final was even more special as just 5 years earlier neither had been league clubs. Cork city were only founded in 1984 while Derry despite existing since 1928 had only joined the league of Ireland in 1985.

Both teams were looking to get their hands on the cup for the first time.

Derry had tasted defeat the previous year to Dundalk while the last time cup final fever visited Leeside was in 1973 when Cork Hibernians (no longer in existence in 1989) won the cup after a replay in Flower Lodge.

On April 30th over 20,000 fans packed in to the historic Stadium in Dublin’s Northside. Those supporting the heavily fancied Candystripes vastly outnumbering their southerner opponents. A sea of red and white with hints of green covered the terraces.

However it was the Cork team in their iconic styled jersey of the era (better known as worn by the world cup winning German team the following year) who surprised their opposition by starting with high energy and intensity.

Headers from Brian Carey and Liam Murphy in the first five minutes nearly opened the scoring for the Leesiders. It took 20 minutes before Derry had their first real chance when Jonathan Speak’s low drive was saved from Harrington in the Cork goal. The sides went in at half time scoreless. 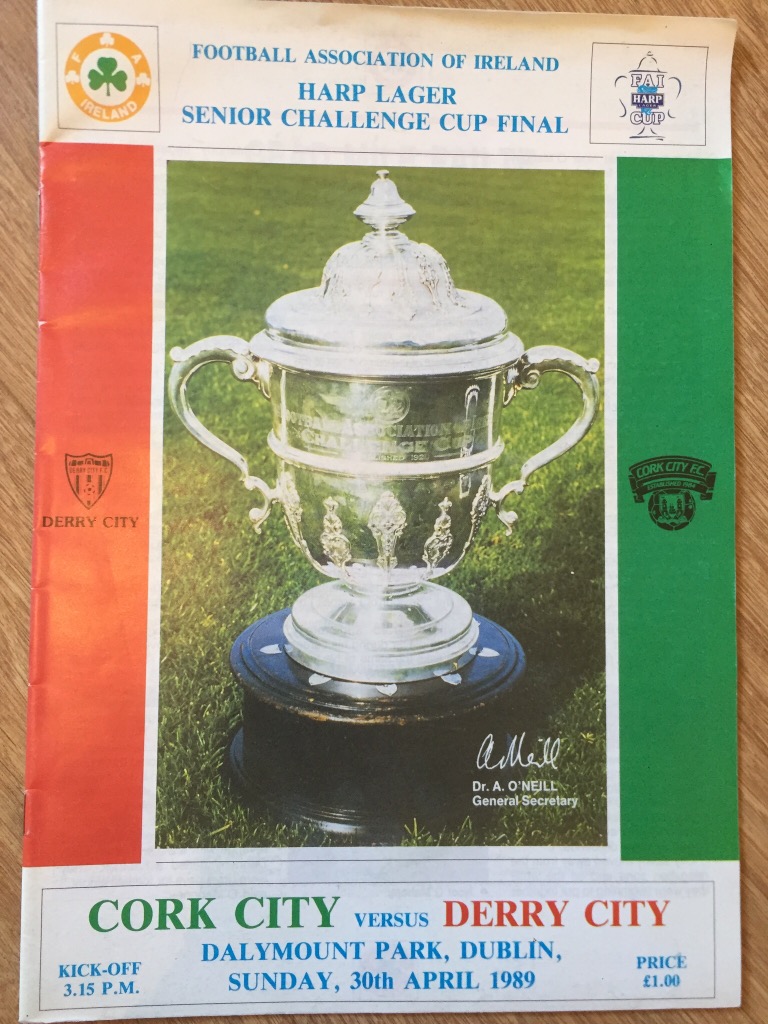 Derry introduced Noel Larkin in the second half and the northerners began to look more like the team who dominated the league. Moving the ball forward with flair.

However it was then Cork came closest to scoring when a clever build up between Liam Murphy and Patsy Freyne set up a volley for Dave Barry. Off his left foot the ball hit the inside of the post and agonisingly along the goal line and away.

After that Derry imposed themselves on the game and chances from Carlyle and Doolin nearly broke the deadlock. Then Coyle was put through but could only find the side netting. A late chance for a matchwinner from Speak was headed away by Corks resilient defence.

The game ended 0-0 with Barry lamenting “We were so close to causing the shock of the season.”

The replay scheduled for the same venue the following Sunday meant travel plans for players on both teams required tweaking.
Noel Larkin who had been so influential for Derry had planned to emigrate to Australia that week but a chat with manager Jim Mclaughlin postponed this.

Dave Barry was scheduled to travel to the big apple with the Cork Gaelic Football team to play New York in the national league final. As this was to be decided over 2 games and on the back of huge public support the county board agreed he would join his other teammates after the replay.

On a warm day in May only 10,800 showed up for the replay but they witnessed a different Derry side. The controversy that saw Jonathan Speak dropped due to a pre-match argument with his manager didn’t seem to affect them.
They played with a lot more urgency and except for the heroics of Corks goalkeeper Phil Harrington would have been out of sight in the first 20 minutes.

However they did get the break through after 11 minutes when a long clearance caused problems in the Cork penalty area before Felix Healy drove his shot into the net to put the candy stripes in the lead.

The Leesiders few chances in the first half included a near own goal by Jack Keay whose back pass fooled Dalton in the Derry goal but to the relief of the red and white support rolled just wide. John Caulfield was put through but indecision meant he fired it straight at the goalkepper.

The second half proved less exciting. Half chances by Cork were stopped by a resolute Derry defence.

However the result was still in question right up to the final whistle and a Pat Duggan cross in to the goalmouth in the closing minutes was headed down by Kevin Nugent only for Barry to just fail to get a touch and with it ended Cork hopes of an upset.

Derry City had won their first cup and completed a unique treble success.

Stuart Guald climbed the steps and rasied the cup to the delight of Brandywell faithful.

Dave Barry would never lift the FAI cup as a player but lead Cork City to their first cup success as manager in 1998.

Alex Ferguson would be impressed with Cork’s man of the match from the drawn game Brian Carey who would join Manchester United later in the summer.

Noel Larkin would emigrate to Australia and continue his footballing career as a player and coach out there.