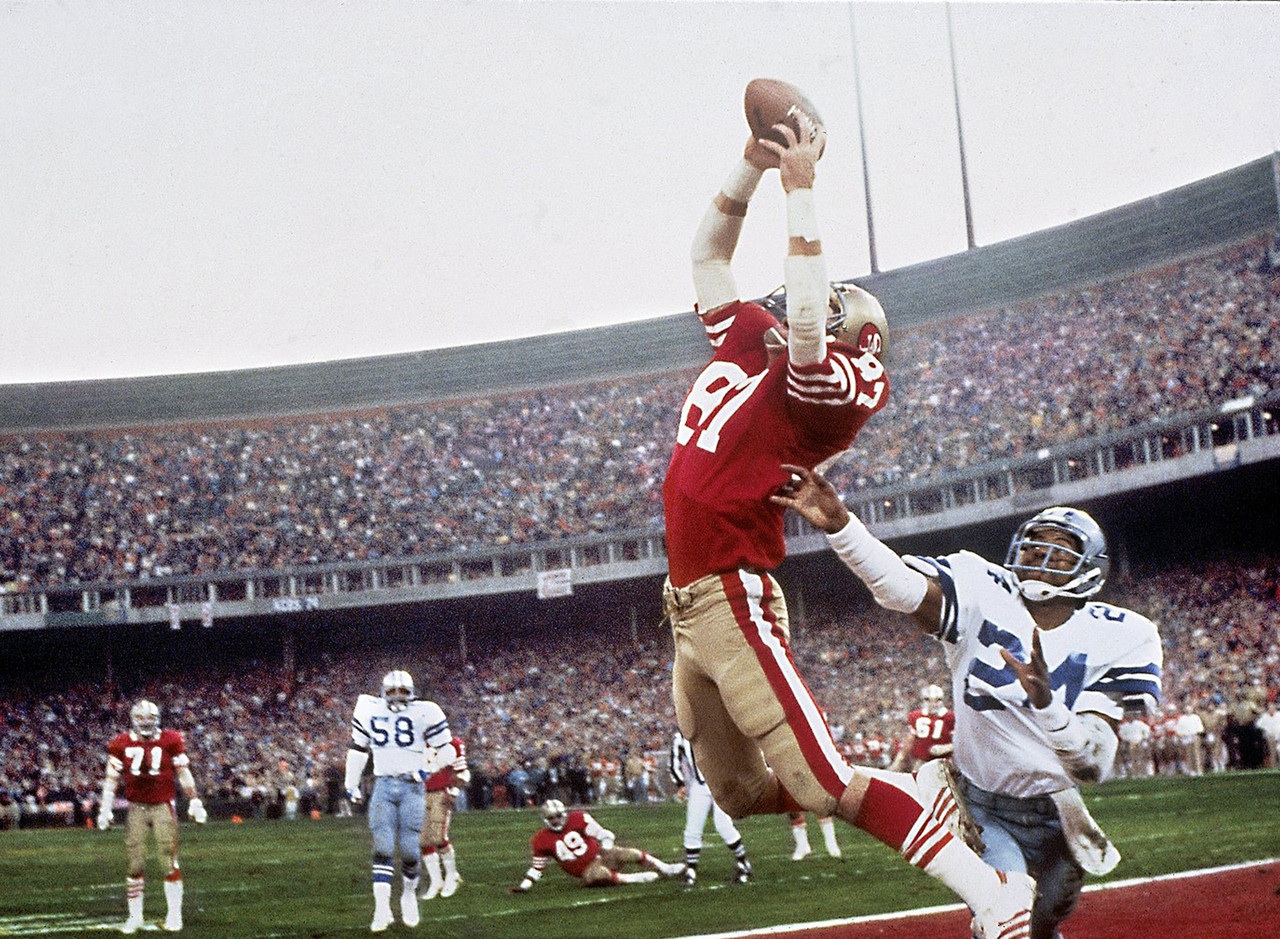 On Saturday night the New Orleans Saints exited this year’s NFC Championship thus officially ending any chance of another game to be played in the historic Candlestick Park. I look at the game most consider the stadiums greatest event.

Sport loves iconic moments….one moment that remains in the memory, which dictates winners and losers, which shape whole sports.

Maradona’s hand of god in the 1986 world cup, Mandela in a springbok jersey in 1995, Darby’s goal against Kerry in 82 or Solskjaer’s goal in the 99 champion’s league final. All unforgettable and a sporting montages dream.

The 1981 NFC championship game between the San Francisco 49ers and Dallas Cowboys created one such moment. It was simply known as “The catch.”

However, these moments only piggy back on a much bigger story. The combination of the other blocks, saves, decisions and scores in these games that determine the result.

Both teams had experienced different fortunes the previous season with the 49ers failing to reach the playoffs with a 6-10 record while the Cowboys at 12-4 reached the championship game only to lose to the Eagles.

A major overhaul to the Niners defence in the off season included the introduction of future hall of famer Ronnie Lott.

The improved 49ers won the western division title and with it the number one seed with a 13-3 record. Their 45-14 defeat of the Cowboys in week 6 proved essential as Dallas equaled their own previous season’s record of 12-4. This also secured their fifth eastern divisional title in six years.

The 49ers met the New York Giants at Candlestick Park in their divisional playoff. Joe Montana in his first playoff game passed for 304 yards and 2 touchdowns as the home side ran out 38-24 winners.

The Cowboys had a much easier time hammering Tampa Bay 38-0 in their divisional playoff game at Texas Stadium.

The scene was then set for the third meeting of these two franchises in the NFC championship game.

The sides had met in the very first NFC Championship game in 1971 with the Cowboys winning 17-10 at the then home of the 49ers, Kezar Stadium. The following year in Texas the 49ers were again denied the championship with Dallas winning 14-3.

On January 10th 1982 the Niners in their new home of Candlestick Park had the chance to finally overcome the Cowboys.

The home side opened the scoring with an 8 yard touchdown pass from Montana to Freddie Solomon but the Cowboys responded with a Rafael Septien field goal before Dallas’s quarterback Danny White connected with Tony Hill for a touchdown to leave the score 10-7 to Dallas at the end of the first quarter.

In the second quarter the 49ers took the lead again with a touchdown pass from Montana to Dwight Clark from 20 yards but the Cowboys again came back and a Tony Dorsett rushed touchdown saw them lead 14-10 at the break.

Only one score was registered in the 3rd quarter when San Francisco’s Johnny Davis rushed for 2 yards to leave the home side ahead 21-17 heading in to the final quarter.

Dallas who were going for their sixth championship victory converted a field goal early in the 4th quarter to leave just the minimal between them at 21-20. The tension in Candlestick Park was building. Then to the bay area’s horror Dallas’s Danny White connected with Doug Cosbie for the Cowboys third Touchdown to put the Texans ahead 27-21.

With 4.54 left in the game the Niners received the ball at their own 11 yard line. Thus began the road to history. Marching 83 yards up the field they found themselves at the Cowboys 6 yard line with 58 seconds on the clock facing a 3rd down and 3. Rolling to his right Montana lifted a high pass to the back of the end zone where a leaping Dwight Clark made “the catch” to tie the game 27-27.

Despite this iconic moment in the 49ers and Candlestick Park’s history more football had to be played before it could earn its place. Firstly Ray Wersching held his nerve to convert the extra point to put the 49ers in front 28-27.

Then the defenses often unaccredited plays but still equal in importance to “the catch” took place. Danny White connected with Drew Pearson which looked odds on for a game winning touchdown for the Cowboys but Eric Wright made the all important saving tackle.

The Cowboys were still in field goal territory and had the winning of the match. Then 2 plays later Lawrence Pillars sacked Danny White forcing a fumble which was recovered by the 49ers Jim Stuckley to secure victory and earn “the catch” it’s moment in history.